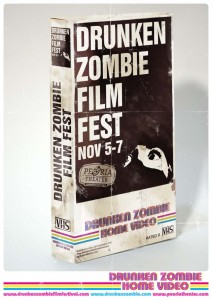 “This November 5-6 Drunken Zombie will be holding its third annual Drunken Zombie Film Festival at the Peoria Theater in Peoria, IL.  The Drunken Zombie Film Festival strives to showcase the best in truly independent horror films.  In years past we have been privileged enough to have such films as Zombie Apocalypse which went on to get world wide distribution, Outpost Doom which has been selling out on DeadLantern.Com, Night Of The Living Dead: Reanimated which has been winning awards all across the film festival market, and Don’t Go Into The Woods which was created by a couple of thirteen year old kids and it blew away a lot of people at last year’s festival.

We have announced tickets for presale on our website drunkenzombiefilmfestival.com.  For the low price of $15 weekend passes can be purchased through our PayPal account.  This is a $5 savings of buying Weekend Passes at the door.  Day passes will also be available at the door for $10 for Friday and $15 for Saturday.  There will be giveaways and Q&As with the filmmakers in attendance.  Internet horror star Lord Blood-Rah will be MCing the weekend’s festivities to really give it a horror host feel.

We’ve already announced an awesome line up of films for the film festival with many more to be announced.

Alice Jacobs Is Dead (short film) – Dr. Ben Jacobs saved the world. The drug he created allowed mankind to fight back against the Z-virus, which nearly destroyed civilization entirely. Now, in the aftermath of the crisis, he’s trying to cure the last victims of the virus. But what will happen when he brings his mysterious work home?

Death In Charge (short film) – In the tradition of E. C. Comics, this cautionary tale examines life through the eyes of Death who gets derailed when a single Mom carelessly mistakes the scythe-carrying cloaked one for her tardy babysitter and leaves Death to care for her precocious 9-year-old daughter. Whitney teaches Death about life’s many marvels through violent video games, macaroni and cheese, and the magic of Sea Munkees.  But when Whitney reveals some dark tendances of her own, it’s up to Death to lighten things up before returning to the grim duties that lie in wait . . .

Eel Girl (short film) – In a secure Military laboratory a scientist has become obsessed with the half human half eel creature he’s studying.  When she beckons to him to her, it’s the call of a siren.  Eel Girl is a provocative and unsettling science fiction/horror short film that combines stunning visuals with the dark and visceral undertones of H.P. Lovecraft.

The House Of Black Wings (feature film) – After a tragic act of violence cuts short her music career, Kate Stone is returning to a city full of ex-fans and ex-friends. Taking shelter with her last friend, a struggling artist named Robyn Huck, the two women work to restore the aging courtyard apartment building Robyn has inherited. But a terrible secret infests the venerable structure, and soon Kate will be haunted by horrific dreams, sinister apparitions, and the sounds of something moving in the walls. She will be dragged into a confrontation not only with her own dark past, but the unspeakable nightmare that lurks beyond the walls!

Night Of The Hell Hamsters (short film) – On a dark and stormy night, a young couple fool around with the occult and find themselves fighting for their lives against demonic possessed hamsters from Hell!

Pickman’s Muse (feature film) – Robert Pickman has become obsessed by visions of unworldly horror, revealed to him through an ancient artifact discovered in an abandoned church. His doctor and friend, Ambrose Dexter is soon drawn into the mysteries surrounding Pickman’s newfound obsession, and struggles to combat forces determined to drag Pickman down the inevitable road to madness.  Based on H.P. Lovecraft’s, HAUNTER OF THE DARK.

Thirsty (short film) – A man’s thirst for a frozen beverage leads to chaos on a lonely desert highway.

Trilogy Of Blood (short film) – When a trio of sexy city gals picks up a broken-down hillbilly in the backwoods of Virginia – the three kittens get A LOT more than they bargained for when they accept the drifter’s invitation to a down-home barbecue. What these lovely ladies don’t know just may hurt ‘em – when they find that the menu of this hayseed hoe-down isn’t the standard ‘burgers and dogs’…

Drunken Zombie is a horror podcast that is going into its third year on the internet.  The hosts are comprised of Wes, Dave, Bryan, and Crazy Uncle Randy.  The four hosts usually drink way to much and then discuss current happenings in the world of horror movies as well as reviewing a specific horror film.  Past notable episodes have included an H.P. Lovecraft retrospective, Alfred Hitchcock Month which looked at his films The Trouble With Harry, Rear Window, Strangers On A Train, Rope, and North By Northwest, Children’s Horror Month where they reviewed Something Wicked This Way Comes, Lady In White, The Gate, and Monster Squad, and they are currently in Psycho September where they are reviewing the movies in the Psycho franchise.
www.drunkenzombie.com

The Peoria Theater is an independent movie theater in Peoria, IL.  It hosts independent films and events.  It has a full bar making it a fun theater experience, to be able to go and have a drink while enjoying films that other theaters don’t have.  The Peoria Theater also is the host theater for The Drunken Zombie Deadly Double Feature.  Once a month the Drunken Zombie crew some an indie horror film teamed up with a classic public domain horror film.  Past events have included Zombie Apocalypse/Night Of The Living Dead, It’s My Party And I’ll Die If I Want To/House On Haunted Hill, and It Came From Another World/Teenagers From Outer Space.
http://www.peoriatheater.com “