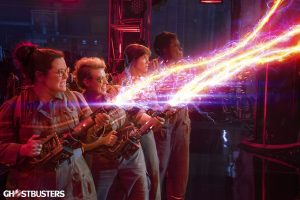 Ghostbusters 2016 starts with Erin Gilbert, Abby Yates, Jillian Holtzmann, and Patty Tolan getting together as Ghostbusters. There is a sudden increase in spectral activity and intensity. As the Ghsotbusters visit each site, they find remnants of some kind of device that appears to be drawing the ghosts more fully into the material world.

Turns out there is a person placing lures out at hotspots along ley lines in the city. All to the purpose of thinning the barrier between the material and spiritual planes. It is up to the Ghostbusters to stop them.

TL;DR Glad the story is not a clone of the original, but the juvenile humor made it fall flat for me.


I went into this movie with no preconceptions. While I love the original, I did not feel the level of hate for the existence of an all-female reboot. I shied away from trailers and online previews. So what I am about to say is not coming from a place of hate.

I did not like this movie. The humor was way more juvenile than it needed to. The characters were played in such a way that makes them wholly incompetent.

First, I was extremely happy to see someone come to see the movie in a Stay Puft Marshmellow Man costume. In my town, the only other movie I saw anyone dress for was the Force Awakens.