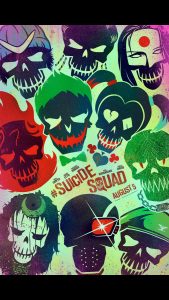 I could take it or leave it. I think i liked the Deadshot from the Arrow TV series better than the one in this movie. I had already talked with friends over which members of the Suicide Squad were going to die by the end of the movie. And I was right. The “Villains” the Squad goes up against just felt wrong and out of place. Margot Robbie killed it as Harley Quinn. Will Smith played Will Smith. I’m not even sure why they wanted the Katanna character there. The Joker subplot to get Harley back was honestly not needed. There was too much Joker for a Suicide Squad movie. And I know Amanda Waller is not a nice character. But she was easily more evil than the Suicide Squad. She killed her whole team in an office building when she was getting extracted because they were not cleared for the information they received.

We do get a bit of Marvel after credits world building. Amanda Waller meets with Bruce Wayne. She gives him information on the Meta Humans she knows about in exchange for his protection after the fiasco in Midway city.