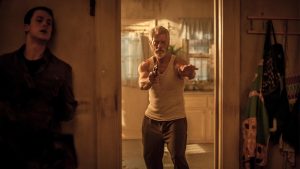 Giving the 3 youths a reason to go in was an attempt to humanize them and make people care for them. Well, Rocky and Alex at least. There is really nothing redeeming about Money. Letting us know that all their friends have already fled Detroit, the situation where Rocky wants to leave for her daughter’s sake, did humanize them a little. But that kind of goes out the window when they target a blind veteran who lost his daughter in an automobile accident where the rich girl who killed her got off.

The 3 manage to get into the house after giving the Rottweiler guard dog a sedative. The cannot do their usual routine of using keys from the security office, because each door has multiple locks. They leave their shoes under a table to minimize noise. When Money pulls out a gun, Alex leaves the house. He does not want to make any possible charges worse – plus this gives the homeowner legal rights to shoot them himself. They end up waking the Blind Man (I do not remember if his name came up) and he gets his hands on Money and Money’s gun. Money convinces him that he alone broke in and gets shot. Alex, who was just on the porch, comes back in to see Money on the floor and Rocky backed into a closet. At this point, Rocky does get to see where the Blind Man’s safe is and how to open it. She then wastes no time, opening it and taking stacks of cash out and putting them in her bag.

Alex and Rocky do well in not making noise, but the Blind Man puts the house in lock-down mode. They begin heading down into the basement to look for a way out (we see a storm door earlier) and the Blind Man finds their shoes…letting him know there is at least one other person still in the house.

At this point, my sympathies are still with the Blind Man. 3 people have broken into his house to rob him. His daughter was killed and her killer did not face justice in the legal system.

While he is clearing the upstairs, Rocky and Alex find a woman chained in the basement (which seems much larger than it should be). The chained woman is the rich girl who killed the Blind Man’s daughter.

Keeping his daughter’s killer locked up…that did give me pause and make my sympathies shift a little. I would assume he would have killed her outright. But I was still on-board.

Rocky and Alex free her and all of them head to the storm door. Just after they get it open, gunshots ring out as we see the Blind Man waiting for them. The chained woman takes a head shot and dies. We see the Blind Man break down in grief. Then he tells Rocky and Alex that they killed his child. Nope, not the woman. He kidnapped his daughter’s killer, impregnated her, and was going to release her after she gave birth. And there’s your EW-factor. Now I have no sympathies for anyone at this point. I mean, I want Rocky and Alex to escape alive – but I do not want them to gain any money from this. I also want the Blind Man to face the authorities for kidnapping/impregnating the rich girl.

We get more fight and flight with Rocky and Alex. Rocky ends up in some ducts in the house. Always nice how the ducts in movies are large enough to fit someone and sturdy enough to get them around. Alex appears to get beat down and stabbed with some shears. Just as Rocky is about to escape through the duct work, the Blind Man grabs her. He takes her down to the basement and chains her to the same place the rich girl was kept. You guessed it, Rocky is taking her place and will have to give him a child. And now my sympathies are firmly with team Rocky.

But don’t worry. He lets her know he is not a rapist and she will get her freedom back in 9 months. He proceeds to take out a large frozen container and a turkey baster. Thankfully, Alex makes it in time to free Rocky. They leave the Blind Man chained up and get ready to leave the house, alive and with all the money.

Not quite, the Blind Man escaped his handcuffs and shoots Alex as he gets the door open. Rocky makes a run for it and the Rottweiler chases her down. The Blind Man drags her back into the house and the two have a final fight. Rocky knocks the Blind Man down into the basement and we see him lying there with sightless eyes and runs off before the police get there.

We next see Rocky and her daughter at an airport watching the news as they wait for their flight to California. The Blind Man survived. The news spins the story of how he fought and killed two burglars. He told the news crew there was no one else and nothing was missing.