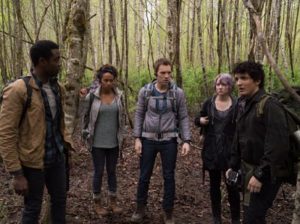 The actors did a decent job.

The moment when James and his friends Nope right out of there after finding stick figure people outside their tents was believable. When they find out that Lane, the local guide, placed the figures to convince them of the Blair Witch , it was very believable.

The movie is full of jump scares. The effects of this were heightened by me sitting in a theater alone late at night. The jump scares did their job of ratcheting up the tension.

This being 2016 and modern audiences having seemingly shorter attention spans, once the action starts it doesn’t really let up. And we see the effects of the Blair Witch on film. Including the Blair Witch herself. We straight up see someone bent over in half because a stick figure bound with their hair was crushed. We see people get hauled off by something in shadow. Near the end, we get the Blair Witch herself in some scenes where she pops out behind a tree for a second.

The Blair Witch herself looks like the end zombie from Rec or Quarantine.

I honestly think I would have enjoyed this movie more with a huge crowd. I’m just not sure it will get one.