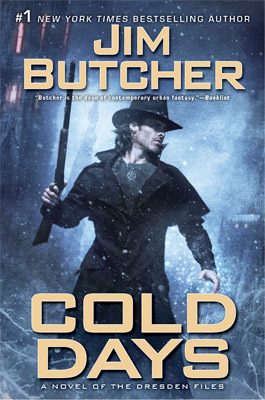 After the events of Changes and Ghost Story, I could hardly wait to see where Jim Butcher was going to take Harry and company. This book was not a disappointment. I love how everything builds on the previous novels. It truly gives a grand scope to the worlds of these novels. While this is probably not the best book to start reading from the Dresden series, you can pick up enough from context to get what is going on. For those of us reading since book one, the layering of elements and payoff is not something you see a lot of anymore.

Here there be spoilers…..

We get to follow Harry’s path to recovery after his body and soul were reunited in Ghost Story. Nothing like having a Fairy Queen try to kill you every day to make you speed up the recovery process.

Mab presents Harry to the Winter Court, where Maeve promptly tries to kill him. This leads to Mab’s first task for Harry…

Along the way, we get to see Harry reunited with many of his friends, families and allies. We also get a better understanding into who or what has been behind, well basically, everything. All the weird things that shouldn’t have been happening from Storm Front onward.

We also learn the true purpose of Demonreach.

By the end of Cold Days, we have two new Fairy Queens and a significant status quo change. Harry’s ties to Winter do not look to be ending any time soon.

During the time Harry was “dead and gone”, events and crises kept right on happening in Chicago. We don’t get a huge info dump or anything. Just that some things happened. Things were taken care of by Molly, Karrin, etc. With the short time-frame going on in the book, there could not realistically be long, drawn out exposition on those events. But they did do a good job of laying seeds down of either things that will come to play in future stories or awesome novelas focusing on side characters.